The painting is by Pissarro and shows a woman bringing in sheep. Her home may be one of the small red and white buildings in the back. The sheep or lambs, may end up next door.

Camille Pisarro painted “La Bergère Rentrant des Moutons” in 1886. If you were able to visit the Musée d’Orsay in Paris recently, you may have seen it. If so, what you may not have realised: this work is an example of Nazi looted art.

For Pissarro’s Shepherdess once belonged to the adoptive father of French Léone-Noëlle Meyer. The Guardian explains Madame Meyer “lost her mother, grandmother and older brother at Auschwitz. She was adopted as a seven-year-old by the Meyers from a Paris orphanage.” 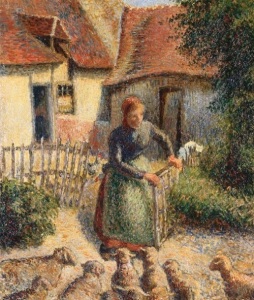 PIssarro’s Bergère, once owned by Raoul Meyer, looted by Nazis, now partially owned by the rightful heir and a museum.

Raoul Meyer bought Pisarro’s “La Bergère” in the 1930s. When the Nazis occupied France, Raoul and his wife hastily fled Paris. Their art collection which this painting by Pissarro as well as a Picasso, a Renoir, a Bonnard and other works, was stored in a vault of a French bank.

Unfortunately, the Nazis discovered the vault and content: the collection was dispatched to the now well-known Jeu de Paume. This museum was used as a Nazi sorting house. Here, the Nazis picked what they liked for their private or museum collections, but much art also disappeared without a trace.

This was the fate of the Pissarro. After the war, it took the Meyers years to discover that their Pissarro was owned by Christian Bernoulli, a Swiss art dealer. Like many others before him, Raoul Meyer “… went to court in Basel in 1953 in an unsuccessful attempt [to] retrieve the work from a Swiss dealer …” The unsuccessful Meyers lost track of their Pissarro again.

The work somehow ended up in America and was sold by a New York art gallery to Aaron and Clara Weitzenhoffer from Oklahoma in 1957. The Weitzenhoffers bequeathed their art collection to the University of Oklahoma in 2000.

The painting entered Oklahoma University’s Fred Jones Jr Museum of Art collection. It took years for Madame Meyer to trace the family’s Pissarro to this museum. In 2012, on discovering where the painting was, she took steps to retrieve it.

This was the start of an ongoing legal battle. In December 2015, Madame Meyer “asked for and received an ‘administrative closure’ of the case for 90 days while the parties sought to hammer out details of a potential settlement.” It seems that during this “legal pause”, an American lawyer contacted Madame Meyer in the middle of the night, put pressure on her and made her feel obliged to sign an agreement.

The work, which according to a French law from 1945 is rightfully hers, became partially owned by Madame Meyer and the Oklahoma museum. The deal was, that Pissarro’s “Bèrgere” would be exhibited alternately by the Oklahoma museum and the Musée d’Orsay, where it currently is on show.

Or as the Guardian states: “Faced with the prospect of losing the painting forever, Madame Meyer had no other choice but to sign an agreement granting Oklahoma half the ownership rights over a painting that, according to French law, Oklahoma had no rights to.”

According to the Art Newspaper, Madame Meyer’s lawyer stated in court filings, that “David Findlay Gallery in New York and the Weitzenhoffers ignored the painting’s provenance in the 1950s and that the University of Oklahoma did not perform its own due diligence in 2000, after the Washington Principals for resolving Nazi-looted art disputes were adopted in the US.”

Madame Meyer tried to find a solution by offering to buy back the painting. If you read books on similar cases, you know this is what often happens to Jewish survivors or their heirs: having to buy back stolen goods.

Rightful owner, yet facing a hefty fine and penalties

In this case, the museum refused to sell. Even worse: it has gone to a US court and is “… demanding Meyer be fined $3.5m in the US and face penalties of up to $100,000 a day for contempt of court if she does not halt proceedings in France in which she is seeking full ownership of the impressionist work.”

Mind: this case is not just important to Madame Meyer and this museum. Many American museums are worried this case will set a precedent. For plenty works of art looted by Nazis, somehow resurfaced in collections owned by American museums.

It seems Madame Meyer will never be allowed to “bring in” her stolen sheep. She is now 81 years old and – according to French law – the rightful owner of “La Bergère Rentrant des Moutons“. In fact, according to The Art Newspaper, French laws ensure this stolen Pissarro painting should never leave France again. Yet she is facing a hefty fine, as well as penalties!

Why is she fighting for this work of art? Is it money? No: all she wants is to donate this painting which was once part of Raoul Meyer’s collection, to the Parisian museum which currently exhibits it, in order to commemorate her family and ensure their painting remains on show in a French museum.

Paris, Musée d’Orsay website (note the museum is currently closed due to COVID19).