The moment I heard the exhibition title “Dongen Witch”, I was determined to visit. It certainly grabs one attention! Yet my visit left me with mixed feelings: it contains interesting works, it reveals interesting facts; but ….

The Breda museum aims to stress the importance of Dongen. In the 19th century, the village and surrounding area had been forgotten by time. Rural, poor, there was plenty to inspire artists. The area became known, when a few artists accompanied troops at the start of the Belgian Revolution. 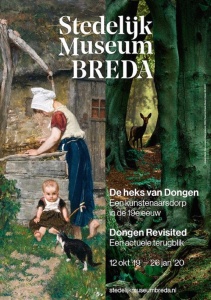 North Brabant and especially this area, was very poor and the industrial revolution only arrived much later, than elsewhere. Some artists were inspired by the unspoiled, romantic landscape. Though a local, joining me in front of one of the exhibited landscapes whispered to me: “A scene near Dongen? We don’t have such mountains here”.

Visitors find, that it is not the landscape but also farmhouses, farmers, cobblers, lace-makers and others inspired artists. Once word got around in the 19th century, Dongen became one of the first artist-colonies of the Netherlands. Some artists only spent a short time here, others returned year after year.

Among the more famous ones are August Allebé, Jozef Israëls, Max Liebermann, Suze Robertson. Their works in turn, inspired van Gogh and later artists. Exhibition visitors come across works from the museum’s own collection, as well as loans from important Dutch museums like the Amsterdam Rijksmuseum, the Amsterdam Van Gogh Museum and Mauritshuis. The Vincent van Gogh-home (Zundert) also collaborated in creating this exhibition.

The witch? Actually, she was just a local, elderly woman. She earned some extra money by allowing artists to use her as a model. A 19th century art critic raved about a painting in which she is shown preparing coffee. He called her the witch of Dongen and the name stuck.

Interesting as well, are the signs artists included in works showing local dwellings. On outer-walls, locals painted ancient signs to ward off evil. One wonders what local priests and preachers, including Vincent van Gogh‘s father, made of such age-old traditions.

Another interesting story revealed in this exhibition concerns direct influence of one artist on another one. There are a few works by Jozef Israëls, showing interiors and poor Dongen families praying over a dinner of boiled potatoes. Vincent van Gogh noticed these moving works and they became the inspiration for his later, more famous “Potato Eaters”.

Then there are the artists who earned a living as teachers. Some took students to visit Dongen during a summer holiday; or published drawing methods which influenced later generations. There even is a photo of one of these artist-teachers, with his class in front of the school-building. Among the boys? Young Vincent van Gogh!

Well worth a visit? Ah: I left rather miffed and upset!

One of the visitors remarked to nobody specific, she did not mind looking at so many posters. For yes, if you follow this blog you know my complaint about that one poster in an exhibition at Alkmaar. Well, here are numerous posters – instead of real drawings and paintings!

You may not mind, I certainly do! I object to this!

After all: do tourists flock to the Louvre to look at some ‘Mona Lisa’ poster, stapled to a wall? (And one does detect the staples in the Breda exhibition!) Do visitors pay for expensive museum-tickets to admire say, Rembrandt’s “Night Watch”, or van Gogh’s “Almond Blossoms” plastered as cheap wall-paper on museum walls – instead of the real works?

If like me, you prefer to buy posters of the exhibited real art at museum shops, to take home and display in a frame: the shop-cum-café at this museum is not well stocked. So ruffled, I left and headed into Breda’s interesting historic center. After all: this offers tourists interesting shops and numerous pubs. It is worth a visit in its own right.

Breda, Stedelijk Museum: “Dongen Witch” runs till 26th of January 2020 and is one of several exhibitions this museum offers.

Image: detail of one of Israëls’ paintings (loan to this exhibition) which inspired van Gogh’s “Potato Eaters”; and exhibition advertising poster.