More details are becoming known about the Dresden heist. Police are now hunting for four criminals who carried out this “targeted and premeditated crime”.

One of the photos, released by the museum and included in my previous post, shows a beautiful sword? If you took a good look at the photo, you noticed this sword is covered in white diamonds. Its hilt alone contains 9 large and 770 smaller diamonds.

The famous Dresden White Diamond, lost in the recent heist.

Another piece of jewellery is a shoulder-piece. It includes the famous Dresden White Diamond. This 49-carat white diamond is estimated to be worth about 9 million Euro and was the most precious piece in the collection. Like many of the stolen items, it was bought by August the Strong in 1728.

Monday, international media already reported, the thieves tampered with security by causing a power-outage. Once inside the vault, one of them used an axe to shatter the special glass of a display cabinet.The whole robbery was caught on security cameras and some stills were released to the press as early as Monday afternoon. 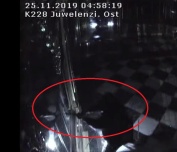 A still of from one of the cameras shows the moment one of the thieves uses an axe to shatter the glass of a display cabinet.

At first, it was thought two thieves were involved, but Dresden police has now told journalists four people were involved. It is thought by some, the robbery may be gang-related with links either to Dresden and/or Berlin.

Police offer a reward of 500,000 Euro for a tip-off revealing the names of those involved in this heist.

Tourists with tickets for a visit to the Green Vault were unable to visit it during the past few days. Police were still investigating the crime-scene. Thursday afternoon, Dresden police told journalists the tourist attraction may open late Friday or this weekend. 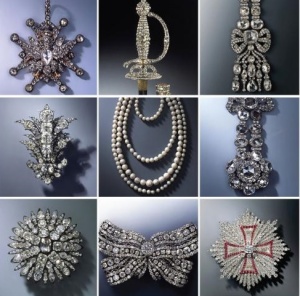 Part of a police hand-out, showing photos of a few of the stolen items.