The Dresden heist became headline news yesterday, but international media soon focused on other stories. German media, however, had more to report today. Police revealed at least two burglars were involved – and caught on camera.

Dresden police stated, the first alert was at 4.59 a.m. when security at Dresden Castle spotted the burglary on surveillance cameras and immediately contacted police.

A still from a security camera, capturing one of the Dresden heist burglars. (Faznet)

Within less than 10 minutes, a first police car was at the scene. By 5.09 am, over 16 police cars were already hunting for the burglars in their get-away car. By 5.22 a.m. the Bundes Polizei, Germany’s federal police, had been alerted.

At a press conference, police explained what had been recorded. “They broke a window and entered the vault, ran to one specific display-case. The security glass of this case was shattered using an axe. Most of the exhibited items were grabbed. The criminals exited the same way they had entered, then used an Audi to escape. Not much later, a similar car was found burning in a parking garage.” 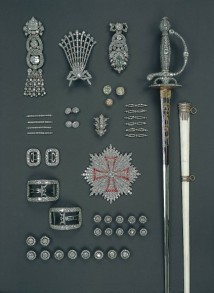 Some of the items, stolen in the Dresden heist. (SKD)

Police and museum staff contradict rumours, that the complete room had been emptied. Nevertheless, the loss to Dresden, Saxony, Germany is immeasurable: three of the ten sets of jewellery which Saxony’s ruler August II the Strong had had made to compete in brilliance with France’s King Louis XIV, are among the missing items.

Other items include ceremonial swords, brooches, buttons – and more. The number of stolen items amounts to roughly 80 items and includes not just diamonds, but also a queen’s pearl-necklace.

From the perspective of art historians and historians, this is an irreplaceable loss. Many items were complete sets, belonging together and handed down over centuries.

These will likely be broken up, to easier sell precious stones and melted metals. As the devastated museum director remarked: “… They remained together for over 300 years; survived wars, a looting and transport to the Soviet Union, as well as a return to the DDR … and now this …” 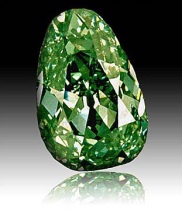 Yet one of the most valuable pieces was not in the Grünes Gewölbe or Green Vault during the raid. The collection’s famous Dresden Green Diamond, a 42 carat stone, is currently in New York. It stars – or as the SKD put it, is “Dresden’s cultural ambassador” – at the Metropolitan Museum of Art‘s exhibition “Making Marvels: Science and Splendour at the Courts of Europe”. This exhibition opened 19th of November and closes 1st of March 2020.

Tuesday 26th of November 2019, tourists and locals waited in vain to visit Dresden’s Castle. According to the latest press release on the museum’s website, the castle will welcome visitors per Wednesday 27th of November. The Green Vault, however, will remain closed for the time being.